Paul was walking along the docks looking for Angel, hoping to not find her and there she was.  Coming out of the Bank.  Dressed in gray and wool, looking nothing like he ex 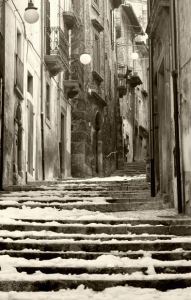 pected.   Three years.  Michael had said she had to come back on her own.  So why was Paul doing this.  He went back to his room and thought long and hard about what he would say to Miriam.  She was dead.  She was shipwrecked and dead.  Gone, Gone.

The House of Magdalena was what the sign said.  He walked right in and to his surprise it was not a house of ill repute but a classroom of young women all dressed like Angel the day before.  He could just leave now and go back and see the wife of his dreams.  He’d been gone for several weeks now and he missed her loving touch and warmth.  But there would be no warmth if he came home alone.

“I’m looking for someone.  Angel.  Her name is Angel.”  “Paul”  somehow she looked like Angel but more soft, serene.  Looking well.  Beautiful as ever.

“Miriam is going to have a baby.”  He watched hoping that would hurt Angel.

It was delight on her face.  So happy for her and Michael.  Michael what?  Paul couldn’t breath.  He didn’t realize she had left the valley three years ago for the same reason he tried to leave.  She wanted Michael and Miriam to get together and have children.

How ashamed did he feel.  Now he is starting to see why Miriam was always saying to him, “you don’t understand”.  “Angel is doing what she thinks is best for Michael.

“Miriam is my wife. Angel, Michael is still waiting for you to come home.”  The horrible guilt weighed heavy on Paul, seeing now how much she loved Michael and had really been doing what she thought was the best for him.  She was sacrificing her happiness for him to have a child.

“I was wrong about you the whole time.”  They talked for hours.  Each understanding now how wrong they both had been.  Paul called her Amanda.

“Miriam sent me to find you, Amanda.  You have to come home with me.”

She told him everything, from being 8 years old being sold to Duke for his pleasure to Duke making sure she could never have children.  Paul reminded her that Michael chose her.  He knew what he was getting and he still chose her.  For better or worse.  Michael would honor his vow to her until death.

Angel explained what the House of Magdalena was to her and how she felt she could not leave it.   He told her to think about it and he would be leaving by noon the next day.

She stayed up most of the night talking with her dear friend Susanna explaining that she could handle the job and that she was going home.

New to blogging, but have been doing Women's Interest like Bible Study for over 26 years now. Married, three boys, 5 grandkids. Love God's Word and helping Women discover the power in Jesus' name by getting together with them often. Monthly meeting called Seasoned Sisters. View all posts by shelleybea12153

to Extraordinary Life in Christ

Mark 6:31 “Come away by yourselves to a secluded place and rest a while.”

Mark 6:31 “Come away by yourselves to a secluded place and rest a while.”